You are at: Planned Giving > Gift Options > Donor Stories

Grandchildren honor past president with donation 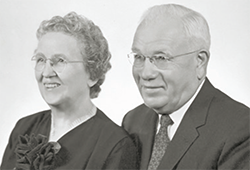 During the Great Depression, Huntington College President Dr. Harold C. Mason was a mighty tool in God's hand to save the college from closing its doors due to financial distress. Today, his grandchildren, Barb (Mason) Rohrs and Ron Mason are continuing his legacy of dedication with the Harold C. and Alta Mason, Wendell D. and Jane E. Mason Endowed Scholarship.

"We're indebted to the college and the UB church," Mason said, who attended HC for one year. Although he and his sister did not graduate from HC, their parents (Wendell and Jane Mason) and grandfather (Harold Mason) were alumni with longstanding connections with the college and the United Brethren church.

Besides serving as HC president, Harold had been the youngest bishop of the UB church in his time.

Harold's son, Wendell, was the student newspaper editor while he attended HC. It was there that he met his wife. Later in life, Jane worked as an archivist for the UB church and Huntington. She made a significant contribution by establishing the archives in the lower level of the college library.

Because of the family's love for Huntington, Mason and his sister looked forward to the day when they could find a meaningful way to honor them. The scholarship seemed a fitting honor.

"Some close friends of the Masons had (established) an endowment for the college. I had always wanted to do it, but I wasn't sure how," he said.

Mason had thought that investing in HU in this way was something he would do down the road, but then he stumbled upon a way to make it happen sooner than he had ever dreamed possible.

Mason had been making an online gift to HU with his credit card one day when he discovered that the university accepted gifts of real estate.

It just so happened that he and his sister, Barb, had been trying to sell their parents' home located in Huntington. After discussing it, they were both excited about the idea of donating their childhood home to the university. In the process of his donation, Mason discovered he wasn't the only one in the family who had gone this route to invest in Huntington.

"My Uncle Bob and Aunt Nell... had also donated a house. I guess we followed in their footsteps," he said.

By making a gift of real estate to Huntington University, Mason and his sister were able to establish the endowed scholarship much sooner than they had expected.

"Now that we have it set up, we plan on making a large contribution to it every year. It's great to be able to honor our folks this way, and at the same time help students go to college," he said.